“We don't only need young people's faces and voices, we need their minds, their input, their creativity.” [Sanne] 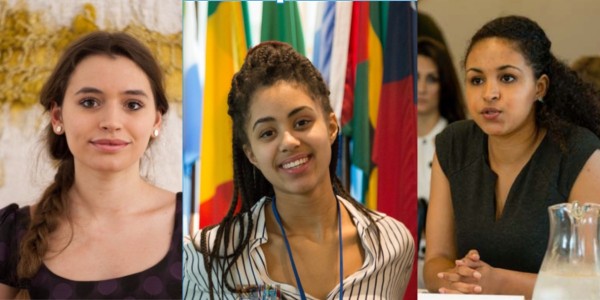 CHOICE is taking our YouthUpUN campaign to the UN Human Rights Council in June, and we will join the fight for meaningful youth participation in UN processes. Our hope is for this campaign to make waves and to put pressure on states to introduce a youth delegate, so please share this article and use the hashtag #YouthUpUN to spread the word and share your voice.

“The UN system is a machine that has been built over a long time and that will need to adapt rapidly in order to be able to handle some of the most pressing issues around the globe. Meaningful youth participation will help the UN to really address realities at a high-level.  Not only youth are calling for this; the world is calling for this inclusion to tackle everything from sexual and reproductive health and rights, to climate change to education. The UN needs to lead.”

In order to more accurately share the voices of youth, CHOICE has gathered testimonies from young people who have held, or currently hold, youth representative positions, where they engage with the systems which often neglect to invite them in. Our three Youth Representatives for this article are Sanne and Lotte; former Youth Ambassadors for SRHR and current CHOICE Youth advocates, and Jahkini; Youth Representative for Human Rights.

Part of the struggle of working towards Meaningful Youth Participation is not being taken seriously as a young person with as much to offer as a ‘more-experienced’ person. Young people already feel responsible for fighting injustice (for example Malala Yousafzai) or fighting for the future (for example Greta Thunberg), yet we are not given responsibility in official systems. As Jahkini states, “Often we hear that young people should educate themselves, they need to be more vocal, etc. In my opinion young people already have a voice. Young people are educated and generally are very active citizens. In order to realise meaningful change, we need intergenerational collaboration, since those in political and administrative power are usually 'older'. Youth is usually only included in the General Assembly, when discussing 'soft themes'. Young people should also be invited to participate to other fora and UN entities such as the Security Council or Human Rights Council.” Older generations need to recognise the value of having young people at the table. Particularly as youth will be dealing with the fallout of the current political issues for a lot longer than any other generation. Lotte argues that “a lot of decisions made at the UN-level will only show their effect after a longer period of time and these decisions will, therefore, impact us more than it will impact older people (for example, climate change). Also, young people are an important factor in many of the issues that are currently important at the UN level, such as demographic dividend, migration, or rising extremism.” And even if we make it into the room, the reception is not welcoming. Sanne, in particular, found that “as a young person, walking into high-level spaces can be lonely. You often have to prove yourself more than others in the room, without having young peers to back you up”.

A clear motivator for getting involved in Youth Affairs is a lack of representation of young people on the national level. For Jahkini this lack of representation was not good enough, “When I was 17 there were elections for the parliament. Most of my friends, who were 18, did not go and vote. They told me that they do not feel like politicians represent them: young people. This is understandable because more than half of our world population is under the age of 30, but this is not reflected in the politicians that we have. That is why I became a Youth Delegate at the United Nations; to bridge the gap between youth and international politics.” Globally, less than 6% of parliamentarians are under 35 years old and encouraging youth participation is indeed an issue that is found worldwide; a lack of political representation is one of the main causes.

Young people may find themselves wondering how much impact Youth Representatives really have. For Jahkini, her role was in large part gathering data from thousands of young people, and then taking “this input to the United Nation where we can give speeches, negotiate on resolutions and organise side events”. For Sanne, “As the Dutch Youth Ambassador for SRHR, I provided input on policies on SRHR within the Dutch Ministry of Foreign Affairs. I also engaged at high-level events, such as those taking place at the UN in New York and Geneva, where I advocated for more meaningful youth engagement.” Jahkini and Sanne used their passion, skills, and position to help create meaningful change.

When asked what issues young people face in working on improving youth participation, there was no shortage of answers. For Sanne, “[One] challenge is the support that you get: many young advocates need more support to navigate these spaces and have someone check in on how they're doing physically, emotionally and mentally as it can really be challenging at times.” For Lotte, the practicality of breaking into these spaces as a youth-led organisation brings other troubles; specifically a “lack of financial resources, where young people are expected to work for free, a lack of capacity building on Meaningful Youth Participation for both adults and youth, tokenism,  or sometimes simple practical things, like high level or older people taking up so much speaking time that there is no time left for you to say anything.” Tokenism is when young people are invited to participate, but only in a superficial manner because, in reality, young people do not have a voice and their opinions are not listened to or respected.

Looking forward, what can be done to make young people's participation in UN processes (even) more meaningful? For Lotte, making strides in youth inclusion means increasing financial resources for Youth-Led NGOs, “so that we can actually pay people for their time and thus have more manpower to participate at an equal foot with adults”. Sanne argues that in order to make change on the UN level, the only way forward is to include youth, “We don't only need young people's faces and voices, we need their minds, their inputs, their creativity. Let's have young people not only being on the stages they deserve, but let's also have them in the closed-door policy drafting sessions, where they can really shift narratives and change minds.”

For more information on our YouthUpUN campaign, please click the link.