CHOICE goes to the 50th session of the Human Rights Council 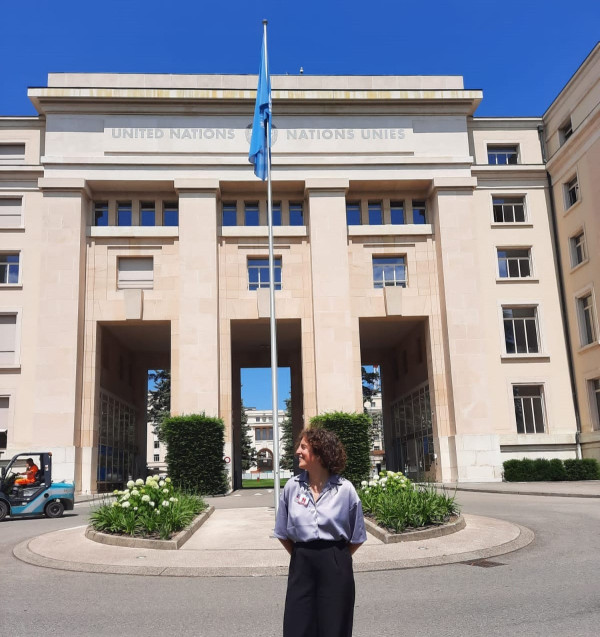 The 50th session of the United Nations Human Rights Council (HRC) lasted from the 13th June to the 8th of July 2022. CHOICE for Youth and Sexuality attended the first week of the HRC in Geneva, Switzerland, and I went as a Youth Advocate on behalf of CHOICE. I volunteer at CHOICE to advocate for Sexual and Reproductive Health and Rights as well as Meaningful Youth Participation, which were also our focus areas during the HRC. The Council is a body of the UN made up of 47 Member States that “has the ability to discuss all thematic human rights issues and situations that require its attention throughout the year”. The Member States are elected by members of the General Assembly.

Throughout the week, I noticed and learned several things about the HRC. First of all, the Council is not an accessible space as I was hoping to see, but rather quite closed. NGOs that do not have ECOSOC* status cannot attend unless they are sponsored by another organization which does have it. And getting ECOSOC status is not easy at all, it takes years, and is especially difficult for Youth-Led Organizations. Furthermore, organizations from the “Global South” remain underrepresented because of visa issues; several people were denied a visa and were therefore unable to join because of restrictive rules and procedures. In addition, Geneva is a very expensive city, which is problematic in terms of accessibility, as smaller organizations (often the case for Youth-Led Organizations) cannot afford to engage as much as they would like.

However, the week was also exciting. After 2 years of COVID-19, it was the first time CHOICE was back there in person, instead of engaging virtually. During our week there, we were particularly focused on the renewal of the mandate of the Special Rapporteur on Violence Against Women and Girls (CHOICE was part of a group of NGOs advocating for the expansion of the mandate to include girls), the resolution on Discrimination Against Women and Girls and the renewal of the mandate of the Independent Expert on Sexual Orientation and Gender Identity (IE SOGI). All three topics were controversial, and conservative states were fighting to leave girls out of resolutions because they do not believe that young women should have the same rights as their 'adult' counterparts, but rather that they should be protected. The topic of SOGI is also highly controversial, with many conservative states putting up barriers during negotiations at every chance. Besides, while I was there in the negotiation's rooms, I noticed a high absence of African missions and I learned later the reason; many African states did not show up during the negotiations because they do not recognize the existence of queer individuals.

In all of these challenges, CHOICE talked to allies to make sure that young people would be included in the outcome documents of the HRC (known as resolutions) and we also pushed for more progressive language to be included. Our partner, Riju Dhakal from YUWA in Nepal, also gave a joint statement with CHOICE highlighting the challenges young queer people face. I am also happy to say here that this work was all worth it because the IE SOGI mandate was renewed! Besides this, the Mandate of Special Rapporteur on Violence Against Women and Girls was adopted, as well as the resolution on Discrimination Against Women and Girls, which included language such as; “The Council urges States to remove political, legal, social, practical, structural, cultural, economic, institutional and physical barriers and those derived from misuse of religion, that prevent the full, equal, effective and meaningful participation, in all fields, of women, and of girls” (A/HRC/50/L.22/). This is significant because it highlights different forms of discrimination women and girls face and also mentions Meaningful Youth Participation, which is a core value of CHOICE.

When it came to the resolution on Discrimination Against Women and Girls, further positive steps were taken. This was, indeed, the first Global Policy document highlighting girls’ and young women’s activism; the resolution calls governments to create safe spaces for these activists to safeguard them from discrimination, violence or harassment. This is important because it recognizes the importance of the activist work done by young women and girls. However, there is still much to do. Being there proved to me that the Opposition is strong and that the anti-gender movement is growing. During the debates, the conservative states never failed to mention that they did not want the term “gender” to be included in the resolutions, for instance. This movement also uses the image of the “innocent child” to support the idea that children should not be taught comprehensive sexual education because it would damage them. This is also the same arguments they were using at the HRC to justify conservative statements.

This is also why it is so important for organizations like CHOICE to be there and for civil society to engage as much as possible. Knowledge is power, and we need to stay informed to understand what is going on. Sometimes, international processes seem impossible to understand and comprehend, however this is not the case! Therefore, I would like to share some information, resources and tips to engage with the next HRC. The 51st HRC Session will happen from the 12th of September to the 7th of October 2022, always in Geneva. Here is what you can do to stay engaged:

*ECOSOC Status means a consultative status given to an NGO, meaning that they can access human rights mechanisms, subsidiary bodies, ad-hoc processes and special events.

We Have A New Youth Ambassador!

CHOICE goes to the 50th session of the Human Rights Council - read about the experience through the eyes of our Youth Advocate!